Following on from my post on Gear Lever Refurbishment the intention was to make some slight adjustments to the rear linkage so the lever sits in neutral properly. However, when inspecting the rods it was quite clear that all of the bellows would need replacing as they had perished as well as rust and wear on other parts.

I opted for the Gear Linkage Repair Kit from Brickwerks, this includes not only new bellows but also the bushes, gear shift joint and selector cup.

The following diagram shows how the gear linkage works in operation:

The diagram is from the Transporter with Water-cooled Boxer Engine Construction and Operation VAG Self Study Programme which also includes information on the 4 speed gearbox. 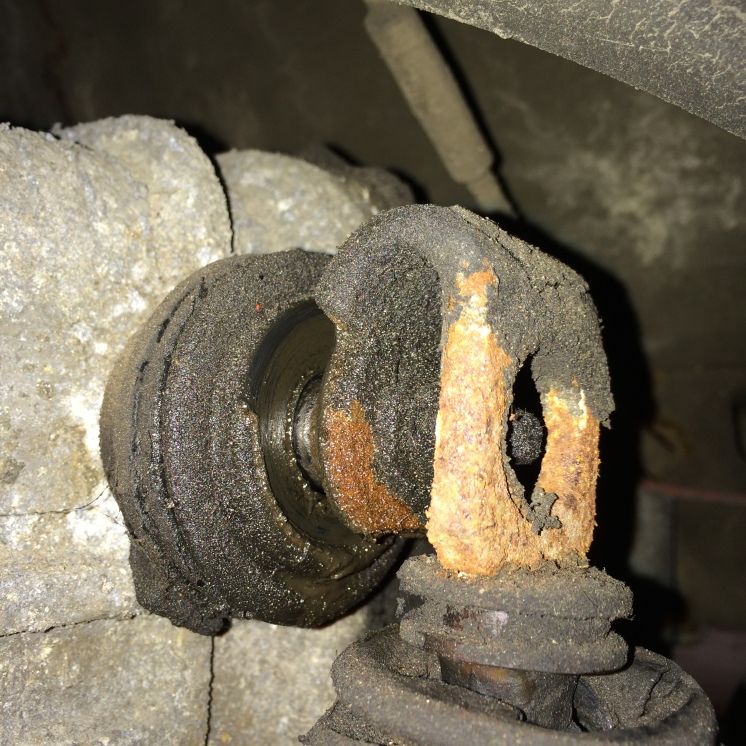 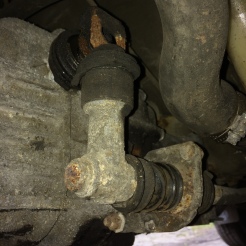 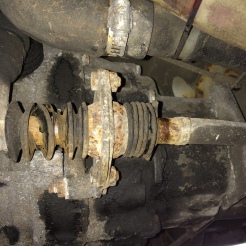 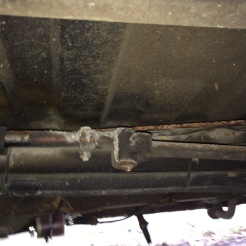 The linkage will be free to drop to the floor. 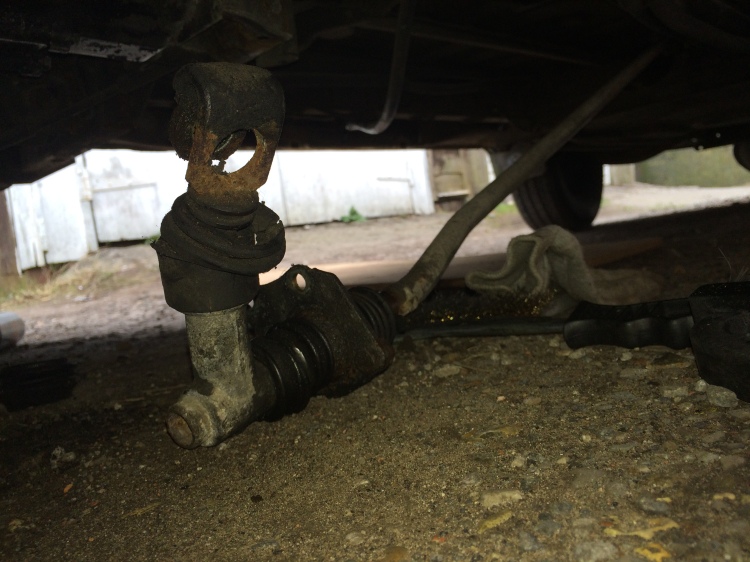 Undo the bolt connecting the Gear Linkage Joint to the front linkage rod and twist/knock this free using a rubber mallet. (Normally you should mark the position of where the two pieces meet before removing so it’s easy to realign. As i’m replacing all the parts i’ve not bothered).

The rear linkage rod and assembly will be completely disconnected and can be put aside.

With the front linkage rod removed you can then undo the two bolts holding the central bush and flanges. (The picture below shows a plastic cover, I twisted this out of the way).

You should then have a nice collections of parts:

The Selector Cup is attached to the rear linkage rod by a roll pin, to get this out you need to find a suitable piece of metal with a similar diameter. I used a bolt and hammered this through. (Do not use anything pointy like a screw as it will make the roll pin expand out and be impossible to remove). 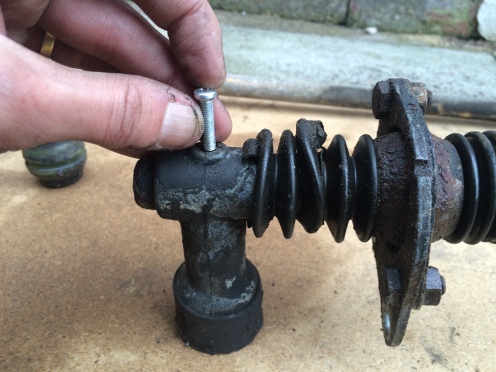 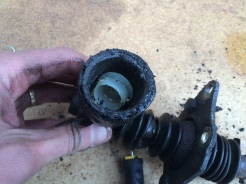 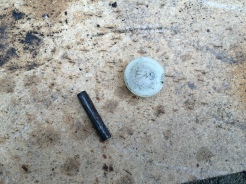 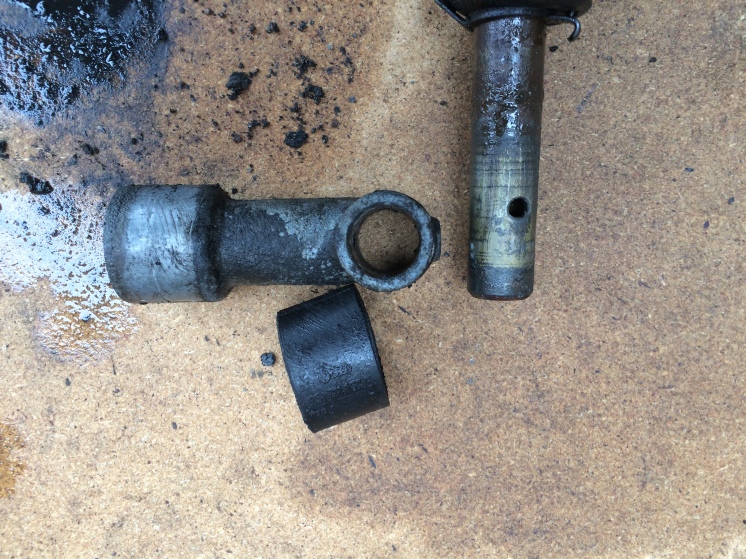 There is a cap inside the cup with F19 on it, this popped out when I hammered the pin through.

Undo the two bolts on the Gear Linkage Support Plate and slide the Flanges and Bush free of the rod. 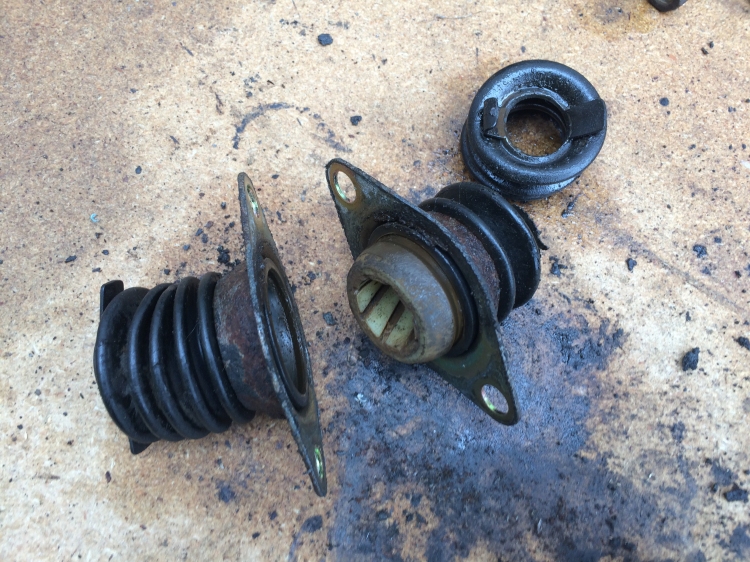 The joint is connected to the rear linkage rod by two pins, remove the circlips and prise the pins out using a claw hammer. 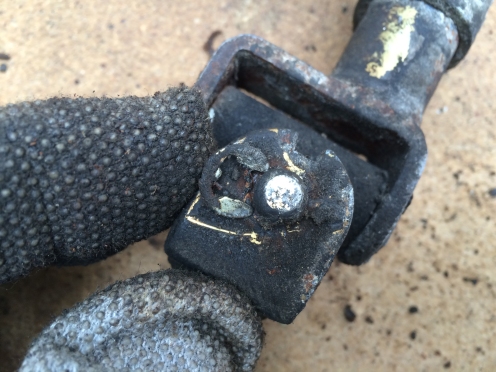 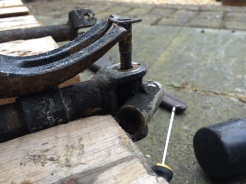 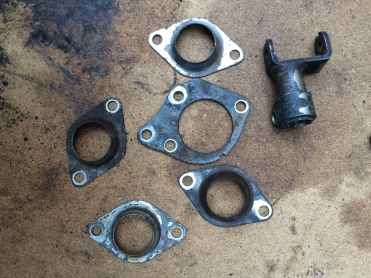 Flanges, Support Bracket and Joint to be reused 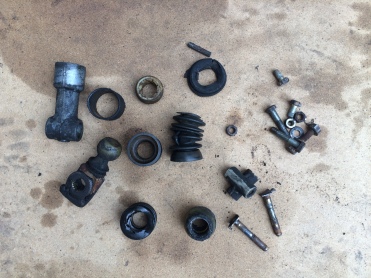 Gear Linkage parts to be replaced

I thought i’d use a micrometer to see the wear on the Selector Ball rear Bush vs the new ones. Selector Ball: 0.18mm wear, rear Bush: 0.42mm wear. 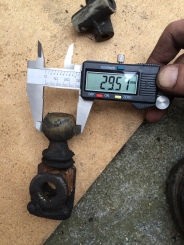 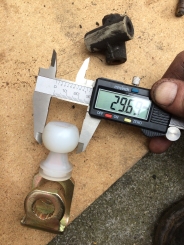 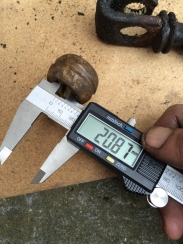 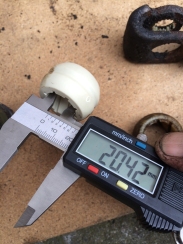 The repair kit from Brickwerks comes with all the necessary parts for renewing the gear linkage. I added a Support Bracket to my order in case mine was knackered, it was fine so I didn’t end up using this.

Putting everything back is a reverse of the removal procedure, with added grease!

I sprayed the rods and flanges with Bilt Hamber Electrox to add a layer of protection.

The Bellows are pushed inside the Flanges and slid on the end of the rod with the rear Bush inbetween, add lots of moly grease.

Both Flanges go onto the rod BEFORE the Support Bracket. I made the terrible mistake of putting the Bracket BETWEEN the Flanges. This is wrong and will mean dismantling everything again. Get this right before driving the pin into the Selector Cup.

The following images show the bracket in between the Flanges, it wasn’t until I fitted the whole lot under the van that I realised.

Slide the Selector Cup onto the end of the rod (make sure you’ve got it the right way up) and hammer the roll pin down to secure it in place.

I warmed the Relay Lever Boot in hot water to soften it up before sliding over both sections. (Moly grease was added inside the cup).

Reconnect the rods in the reverse order from removal.

It was at this point I realised something was wrong, there was no enough space for forward movement. It was as if the bellows were too big. Reviewing the pictures I had taken before removal revealed that I had bolted the Flange to the wrong side of the Support Bracket.

With everything in place there is one bolt on the Gear Linkage Joint which dictates the relationship between the front linkage (including the Gear Lever) and the rear linkage where it attaches to the gearbox.

On the front linkage rod you will see the splines, there needs to be 8-10mm of these visible for the correct positioning of the gate so you can get across to first/reverse.

By rotating the rods you can line up the gear lever so it sits in the neutral position while the gearbox is in neutral.

I recommend following the directions in the Wiki entry Renovating 5 Speed Change Mechanism – Adjustments to get this right.

It is a time consuming task but very straightforward and well worth the effort. Shifting between gears on Sir Adventure is such a pleasure now, the gears are very easy to find and the distance between them has significantly decreased.