The task this week was to replace the Fuel Lines, however when inspecting the tank I found a lot of rust so a new one was purchased from Brickwerks.

I followed the directions in the Club 80-90 Wiki entry Fuel System tank removal.

First I disconnected the battery by taking off the earth lead, made sure the handbrake was on, put the van in gear and chocked the wheels.

I then jacked up the Nearside to allow the tank to drain on the fuel filter side (Offside). I used a 3 tonne bottle jack and hardwood blocks.

Next I removed the filler cap and cut the Offside fuel line just after the fuel filter. I angled a 20L container underneath the van and cut the fuel line with scissors. The tank drained slowly, it took around 15 minutes till empty.

When the tank was dry I jacked up the Offside so i’d have as much room as possible underneath when I drop the tank. 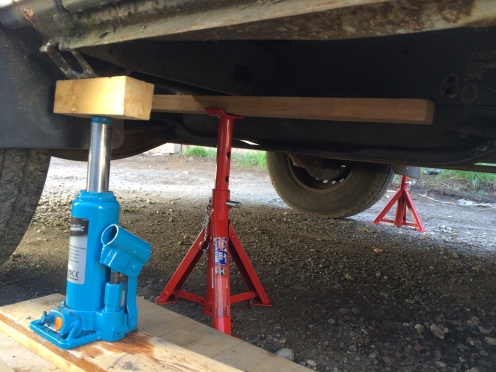 With the filler cap removed you can access the three screws securing the retainer plate, I undid these and poked the rubber neck through the hole.

The Filler Pipe has an secondary breather pipe attached, pull this off and you can remove the pipe out from under the wheel arch. Keep twisting while you do this, the pipe will pop out of the fuel tank and come free.

Twist and pull the Filler Pipe

There are tanks situated under the wheel arches on both sides which act as expansion volume when filling the main fuel tank. In combination with the breather balance pipe they work to allow fuel to reach the top of both sides (the fuel tank has a divot).

Twist off or cut the breather pipes to the tanks, mine were already split so very easy to remove.

Location of Breather Tank under the wheel arch 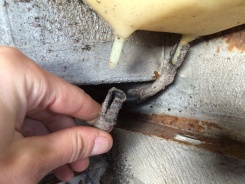 Twist the pipes free of the tanks

It is not necessary to remove the tanks, I did so to check the top seals and treat any rust behind.

To do so: There is one 13mm bolt holding the Breather Tank in place. Even when removed the tank was impossible to get off. This is due to 25 years of dirt trapped between the tank and body creating an unintentional seal. I used a large flat head screwdriver to jab all the dirt out then levered hard downwards. Eventually the tanks popped off.

There are two straps that hold the fuel tank in place. They are secured with a 13mm bolt towards the front of the van and a flap with angled edges at the other. Undoing the bolts will cause the tank to drop slightly, there is a ridge at the front that stops it coming all the way down. The angled edges needed bending back with pliers before I was able to slide the straps out.

Once the straps were removed the tank will drop further down. Undo the connection to the Fuel Gauge Sensor and pull down, the Breather Balance Pipe will pop out allowing the tank to come completely free. As I was replacing the tank I didn’t worry about it getting damaged coming down, it wasn’t overly heavy so was done by hand. If you’re keeping the tank maybe use a jack or some sort of padding when you do the drop.

The Breather Balance Pipe is secured to the van with a small bracket, unscrew this and pull the pipe free of the van.

Pull down to pop and the pipe grommets will pop out

The Fuel Tank free of the van

Other side of Breather Balance Pipe. Check the Handbrake Cable (cable through grommet) and Clutch Pipe (small whie)

The Fuel Gauge Sensor is removed from the tank by twisting anti-clockwise and pulling free. I used a long flat head screwdriver as a lever. Mine had considerable accumulated dirt which needed cleaning off first.

I also removed the four strips of rubber padding on both sides of the tank to re-use on my new fuel tank. I bought new breather and filler grommets, you could however reuse the ones from your old tank if in good condition. 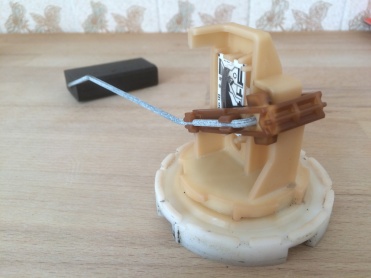 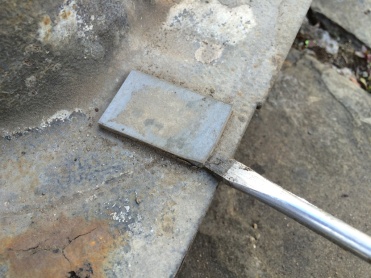 The new tank from Brickwerks came primered ready to paint. I chose to first do a coat of Bilt Hamber Electrox and a topcoat of Rustoleum CombiColor for the ultimate rust protection. I went a bit overboard with my spray can of CombiColor, using it all up on the top of the tank. Luckily I had a tin as well so rollered the bottom (2 coats with 20% white spirit added to thin).

The new tank from Brickwerks

I laid all the pipes out and cut new lengths of 5.5mm Overbraid Fuel Hose (1 metre was enough).

The pictures below show how the breather tanks and filler neck connect to the Fuel Tank:

With the tank out I could inspect the chassis, clutch pipe and handbrake cable. There was some surface rust (nothing too serious) which I wire brushed and coated in Electrox.

To refit the tank I first secured the Breather Balance Pipe to the chassis and fed the hoses through to the wheel arches. The pipe has a kink in it which should be fitted the left side as the tank is lower on this side. Reconnect the Fuel Gauge Sensor here as well.

Tank straps ready to be lifted and bolted in place

I then positioned the tank on the front lip, pushed the rear upwards and slid the tank straps into place. The tank is secure on the lip and tank straps so won’t drop down. I then pushed a tank strap upwards and secured the 13mm bolt before doing the next.

There is space to reach through the wheel arch (removing the wheel gives more room) and push the breather pipes down into the top of the tank grommets. Although you won’t be able to see it, this is what it looks like:

In the image above you will notice the pipe in the top left corner coming through the chassis. This is from the top of the Breather Tank and should have a “trumpet” or “Shrek ear” attached. (I knocked mine off fitting the tank).

The Fuel Filler Breather pipe was pushed into the remaining tank grommet before going to the next step.

The Breather Tanks are nearly as hard to get back in as they were to remove. I devised a cross screwdriver technique to lever the tanks back into place under the wheel arches:

The hoses you poked into the wheel arch can now be reconnected to the bottom of the Breather Tanks.

The Fuel Filler Neck Ring was a rusty mess so needed replacing, luckily Brickwerks do a very nice Stainless Steel version with upgraded bolts. It’s a simple case of enlarging the three holes in the retainer plate with a 5mm drill bit.

I wanted to replace the rusted jubilee clip as well but I would have destroyed the rubber filler neck in the process. (A job for another time when they’re back in stock).

Drilling out the retainer plate with a 5mm drill bit

Stainless Steel Ring in place over the rubber neck 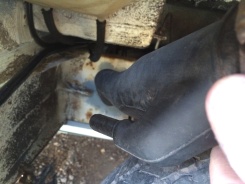 Push and twist the Filler Pipe into the Fuel Tank 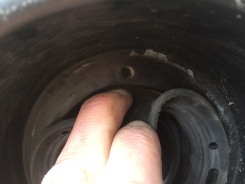 Twist and push the Filler Neck into the Fuel Tank, reconnect the breather pipe and pull the rubber filler neck through the aperture.

Once you have aligned the holes you can bolt the retainer plate back into place. Job done!

My next post covers how to Replace the Fuel Lines.

19 thoughts on “Replacing the Fuel Tank”